Surviving Infidelity: The Cheater Takes Responsibility for the Affair

A client of mine, whom I’ll call 'John,' is sitting in my office offering me a laundry list of explanations for why he had an adulterous relationship.

John, a well-educated and successful businessman is respected in his community for the volunteer work he does locally.

His illicit relationship with Violet, he recalls, began when the two colleagues were away on an extended business trip. John didn’t intend to betray his wife, Sue, but after a few too many drinks late one night, John found himself in Violet’s hotel room, and nature simply took its course.

John confides to me that his marriage to Sue has been less than satisfying. He comes home from work exhausted, and she complains all the time about her day and the children’s misbehavior. Sue has put on weight and has let herself go in other ways as well. His and Sue’s sex life is uninspiring, he says.

“Do you understand why Violet was so tempting?” John asks me.

I understand. Still I don’t condone his actions or anyone else’s in a similar circumstance, and I hold him 100% responsible for his breach of trust. Sue should see it this way as well. Such a view is necessary to successfully survive infidelity after the affair is over.

John is typical of men or women who betray the commitment implicit in their relationship and then try to offload at least some of the responsibility for their misbehavior on their significant other.

Infidelity need not be the death of a relationship.

If the roles were reversed, and it was John who was betrayed and Sue who strayed, my advice would be the exact same.

Getting over an affair requires John to accept and acknowledge that there is never a justification for infidelity. The responsibility for the affair rests 100% with him. Ninety-nine percent is not enough, regardless of the circumstances.

If there were problems in John and Sue’s relationship before his affair, John had many ways to address them legitimately, including seeking professional couples therapy. Going forward, after the affair has ended, and the couple has made progress surviving infidelity and reconciling, John can then legitimately address marital discontent.

For John to tell Sue, which is the natural instinct of many people who betray their partners, that she must "share the blame” with him, is only pouring salt on a wound that he alone inflicted. Worse, Sue might come to believe that she bears some responsibility, which can only leave her wondering what will happen if she repeats her 'triggering' behavior in the future. Will John betray her again?

That is no basis on which to move forward.

For this couple to truly begin to heal, Sue must know without any doubt, and John must reinforce her belief in words and deeds, that no matter what Sue does in the months and years to come, he will never again cheat

Learn if your partner is entitled to be forgiven for their infidelity, take the Relationship Quiz.

The strayer must accept full responsibility for the affair as a necessary position in getting over an affair. If not, trust and security cannot be reestablished and surviving infidelity will forever be incomplete. Learn what to do if the cheating partner blames you for the affair.

How do I forgive a partner who cheated? Here are some best self  books that can help you Survive Infidelity. They are available on Amazon. 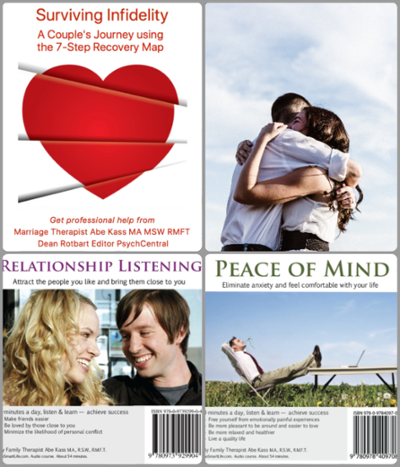 Most often the assistance of a relationship professional who specializes in infidelity is required to help you survive infidelity. Many thousands of couples have successfully overcome infidelity and have gone on to live together in a healthy, normal, and loving relationship. Here are sources where you can find qualified therapists: