Dealing with Infidelity — Deal with Past Relationship Issues

Arising from the emotional devastation of one of most painful betrayals, a couple can build a fresh foundation of love, support, and respect that endures a lifetime.

Doing so — as part of the process of surviving infidelity — isn’t easy.

To stack the odds in your favor, there are 7 Survival Steps that I have identified which couples must take if they are to rebound from the ruins of infidelity. These are steps — to be followed in sequence — that when completed, offer both partners an excellent chance of sustaining and fortifying their relationship.

The path from discovery of the affair, to recovery allows no shortcuts. The journey will take as long as necessary — sometimes months or even years, and may be helped by seeing a relationship counselor.

In Steps #1 through #6, the central issue is the infidelity and each partner’s response to it.

In Step #7, the spotlight turns to the broader relationship, with a close eye on problems that predate the infidelity and continue to pose a threat to the harmony of the couple.

Infidelity seldom occurs in a vacuum. Other hurtful relationship issues, although never a justification for infidelity, must be identified, examined, and addressed in order for a couple to forge a lasting, fulfilling relationship. To just 'move on' after the affair is over makes surviving infidelity unlikely.

For example, if one or both partners felt a lack of sexual or emotional intimacy prior to the affair, now is the time to resolve that problem. The partner who strayed, who for the sake of illustration, I call “John,” must be candid if he was unfulfilled sexually.

Dealing with infidelity requires also hearing what the partner who strayed has to say about his or her feelings about the marriage or committed relationship. This is an essential part of surviving infidelity.

“Sue,” the partner who was betrayed, likewise must speak up now if she felt that John had prioritized work or community involvement over spending quality time with her.

The ultimate strength and durability of John and Sue’s relationship depends on both partners finding satisfaction in their relationship.

The lessons would apply no differently if it were Sue who strayed and John who was betrayed.

Even at Step 7, and in the relationship frontiers beyond this infidelity survival guide, it may be necessary for John to accept limited penance in the immediate aftermath of his infidelity. Spending more quality time with Sue is vital, even if it means forgoing his weekly poker game with the guys or Sunday’s at the sports bar.

If  John is sincerely repentant and follows each of the seven steps in good faith, then it is in the best interest for Sue to forgive him and close the book on this troublesome chapter of their lives.

Postscript: It’s now two years since John and Sue dutifully completed the 7 Survival Steps process and forged ahead with their lives. They remain together and, in fact, are closer than they were prior to John’s betrayal.

Their life path was altered by the infidelity and its recovery process. John and Sue found it necessary to start over in a new neighborhood to avoid running into constant reminders of John’s misbehavior and to avoid a steady stream of comments or stares from others in their old neighborhood who were unwilling to forgive and forget.

Likewise, it took time after the affair was over, but John ultimately left his old job (where he had worked with his paramour) and landed one that turned out to pay better and be more satisfying.

John and Sue’s relationship is not perfect. They still squabble about issues, such as household chores and budgeting. But even those differences seem much more manageable now because John and Sue have been to the relationship abyss and managed to step back.

John and Sue concluded, rightly, that they were better off navigating life’s ups and down together than going it alone.

John came to realize that the void in his life that he attempted to address by having an affair was much better filled by Sue, right there at home. And initially hurt and bitter, realized that John is still the man she fell in love with — a man who had made a huge mistake and now has made amends. Her forgiveness was sincere.

Ideally, partners would never betray one another, and this 7 Step Guide would be unnecessary. Short of that blissful goal, it would be useful for men and women to educate themselves about the incalculable damage that infidelity causes —before they ever stray.

Watch "How Do I Forgive a Partner Who Cheated?" 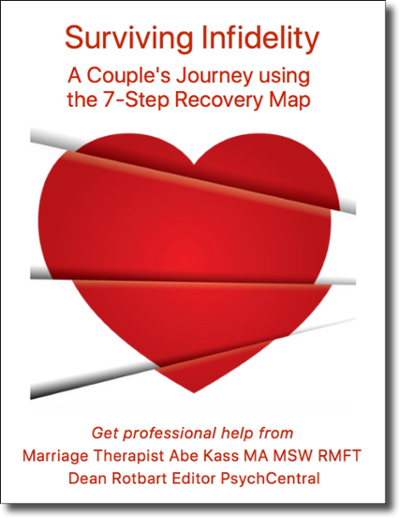 Too often, by the time one or both partners turn to this 7 Step Guide for direction and comfort, the infidelity has occurred and the paradigm shifts to one of damage control.

Most often the assistance of a relationship professional who specializes in infidelity is required to help you survive infidelity. Below are sources where you can find qualified therapists.